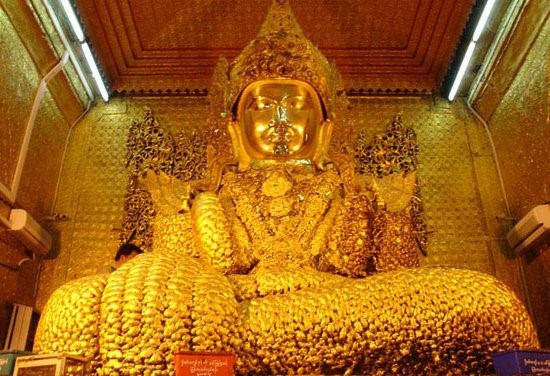 Upon arrival at Mandalay International Airport, you will be welcomed by English speaking driver. On the way, visit to the most country’s revered Pagoda called Mahamuni (The Great Buddha) which was taken from Arakan (Rakkhine) to the present site during the reign of King Bodawphaya. Then, drive to hotel for check- in. 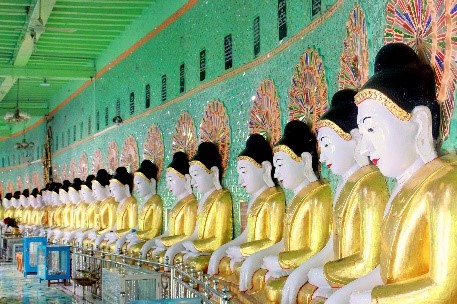 After breakfast, drive to Sagaing (City of victory: religious land). When you arrive at the top of Saging Hill, you will see confluence of two rivers, panoramic of surroundings. Visit Soon-Oo-Pone-Nyar -Shin Pagoda and U Min-Thone-Sel pagoda (thirty-caved temples in which 45 seated Buddha images are placed). After that, drive to Mingun which is river-bank historical site. Start sightseeing with the “Pahtotawgyi” massive unfinished pagoda, Mingun Bell which is the largest functioning bronze-cast bell in the world, and Hsinbyume Pagoda, very beautiful and sublime white-washed pagoda with circular-round shaped square. 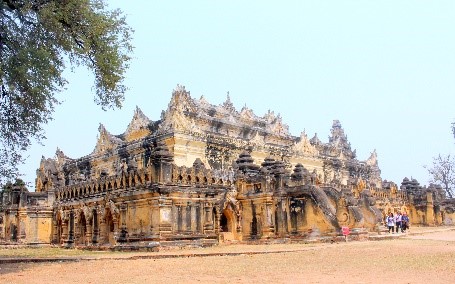 Then continue drive to Inva (Inwa) to take ferry-boat to cross the river. Take local horse-cart for sightseeing in Inva (ancient capital of Myanmar Kings) and go to the Bagayar Monastery built with large teak woods and “Yadanarsimi” Pagoda. Head to the Nanmyint watch-tower, only one still remaining thing from Inwa royal palace buildings and “Mahaaungmyaybonesan” brick-made monastery, the finest architectural religious monument of Inwa era. Proceed to U Bein Bridge, the world’s longest teak bridge for long walk to see local life and beautiful surroundings and to watch amazing sunset. After sightseeing, drive back to Mandalay. 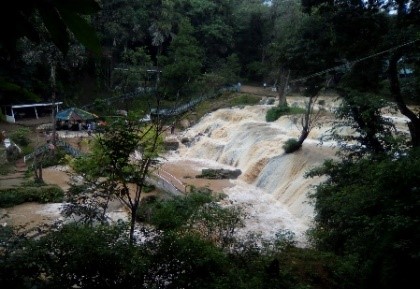 After breakfast at hotel, drive to Pyin Oo Lwin (former British Hill Station town), home of colonial-era buildings is located over 1200m above sea level. Watch around the city centre to experience with local and see land mark of Pyin Oo Lwin (Maymyo) named after the British Colonel May) Percel Tower; built as a present for Queen Victoria. Explore to the local market, ancient colonial styled buildings including churches, houses and offices. Proceed driving to B.E waterfall (locally called Pwe-Kauk) nice place to touch with the natural beauty. You can see the beautiful waterfall and green environment. 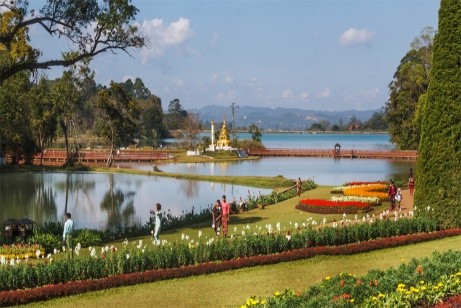 Visit to the National Kandawgyi Garden (this botanical garden was made by Scottish people during Second World War; filling with colorful flowers, various trees, beautiful lake, clean environment and nice atmosphere). The town is quiet and charming but it is very mixed with different residents such as Indian, Burmese, Nepalese and Chinese. 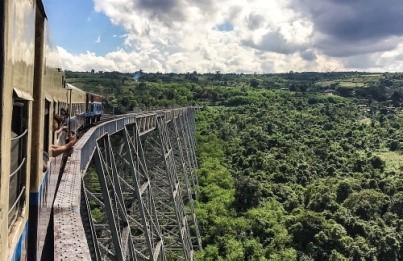 After breakfast at hotel, transfer to the train station to board the local train to Hsipaw, a charming, unspoiled small town nestled amid the Shan hills. The train trip is not only scenic; it will also give you the chance to experience local ways of life. After reaching the outskirts of Pyin Oo Lwin, the train climbs higher into the hills before crossing the Goikhteilk Viaduct, a railway trestle that was once the highest in the world. The views are spectacular and the train travels slowly so that you can enjoy the incredible surroundings from this elevation. When the train stops at Naungpein train station, car drive will pick you up and continue drive to Hispaw. 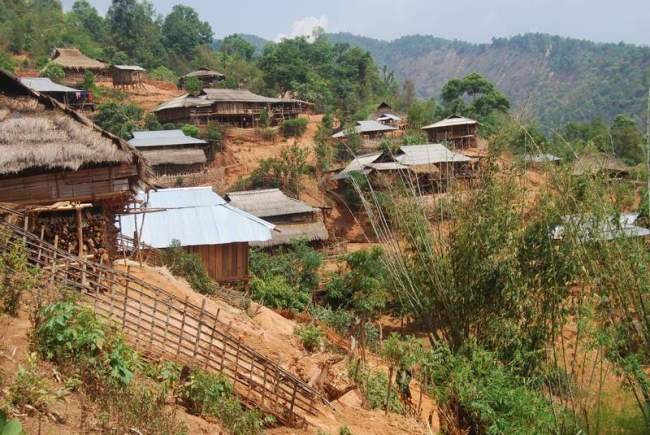 Spend a full day exploring Hsipaw and its surroundings. After breakfast, take a short walk to the banks of the Dothawaddy River where a local motorboat awaits. Climb aboard for a scenic cruise along the water, passing small villages and other boats and bamboo rafts transporting locals. Return to shore and embark on a light trek through pineapple plantations, rubber trees and other agricultural lands until reaching Nyaung Yone, a monastery built more than 150 years ago. After exploring this atmospheric site, return to the river and cruise onwards to the confluence of the Nam Thu and Nan Man rivers. 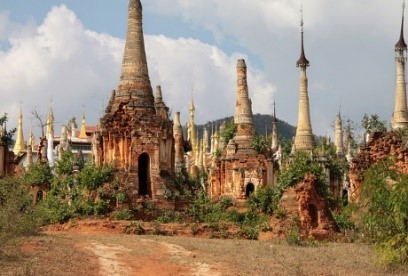 Stop for photos before turning back toward Hsipaw, hopping off along the way for a walk through Sone Lone village. Here you will see traditional Shan houses, giving you a look at the traditional lives of the local people. There are also traditional workshops in this area making cheroots (Myanmar local cigars) and other cottage industries. Before reaching the town you will also stop to visit the former Shan Palace and an area of ancient pagodas often referred to as ‘Little Bagan’. With a camera-full of photos, return to your hotel for an evening at your leisure. 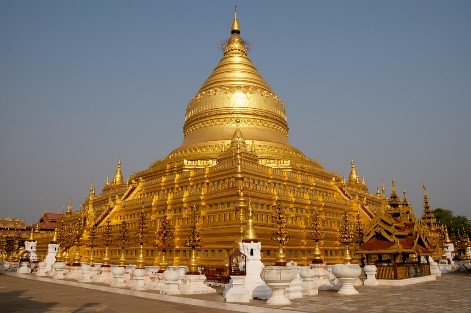 After breakfast at hotel, drive down to Bagan via Pyin Oo Lwin. Today long hours driving is colorful with different landscape and scenery. isit to the Shwezigon Pagoda, the prototype of late Myanmar stupas and best architectural style in upper Myanmar. Enjoy your sunset and drive to hotel for check-in. 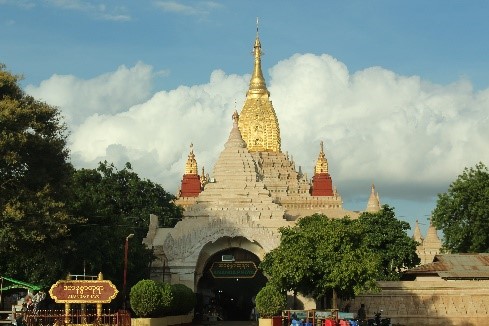 After breakfast at hotel, start temple exploration to Manuha Temple in which ancient Reclining Buddha Image and Big Alm Bowl donated by King Manuha while he was dethroned and brought to Bagan. Next visit to Myingabar Gubyaukgyi Pagoda in there you have chance to see the mural paintings of early Bagan period. Next to it, there are famous Myazedi Stupa (Emrald Pagoda) and Myazedi Stone Inscription which has been recognized as Memory of the World and it has been an important evidence of history of Myanmar literature writing. It was inscribed in four languages in each site by Burmese, Pali, Pyu, Mon. 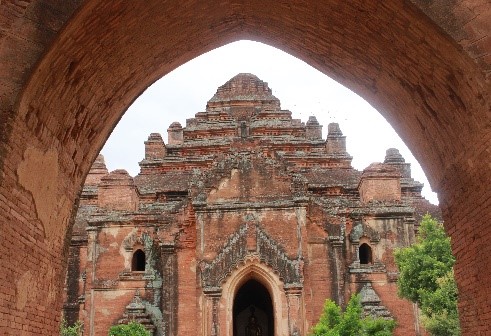 Proceed to the Ananda Temple which remains as one of the finest and most beautiful of all Bagan’s architectural buildings, Htilominlo Temple is a big three story red brick temple in there exquisite finely detailed plaster still remaining, Dhammayangyi Pahto is Bagan’s most massive and famous for its brick-working. Visit to the lacquered ware shop to see colorful lacquered boxes, containers, kitchen wares and items. Continue visit to Thatbinnyu Temple is the tallest building in Bagan high 61 meters and it is four storyed buildings. Watch the beautiful sunset on the sunset hill overviewing the ancient capital filling with thousands of pagodas. 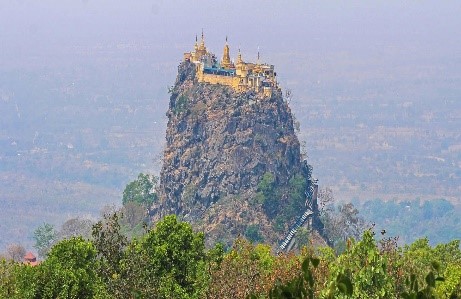 Today you will experience the diversity of Myanmar’s landscapes as you drive from Bagan, in the heart of the dry zone, to Kalaw, nestled in the lush Shan Hills. As you depart Bagan you will pass by farm after farm of toddy palms, tall trees that flourish in the dry, arid terrain. Stop in at one farm to see how the fruits are collected and the juice processed in to a molasses-like sugar and fiery alcohol. Then it is a short drive to Mount Popa, the mythological home of Myanmar’s Nat spirits. Climb to the top of Taung Kalat, a volcanic plug, with local worshippers stopping to pay homage at shrines and to enjoy fabulous views of the plains below. The drive continues from there, crossing the historic town of Meiktila and then reaching the edge of the Shan State. The road will begin to climb, winding through dense forests into the highlands. Reach Kalaw early this evening. 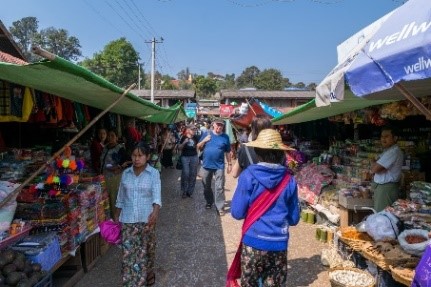 Start the morning with a short walk around Kalaw, popping into the vibrant
Morning market and seeing the mix of religious buildings and colonial buildings located in the town center. Then continue through the Shan State to Pindaya, passing beautiful fields growing cauliflower, cabbages, potatoes and other vegetables. This area is inhabited by various ethnic groups such as Shan, Pa-Oh and Danu and during the journey you may see farmers and villagers dressed in traditional costumes. 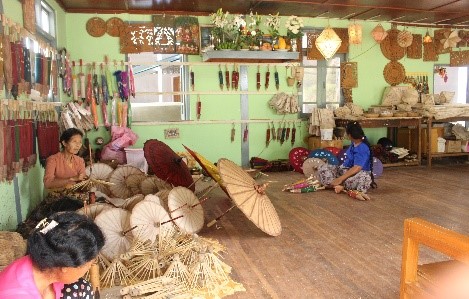 Upon reaching Pindaya, head for the Shwe Oo Min Caves where you will explore the limestone caverns filled with thousands of Buddha images. If you wish you can stop at a family-run workshop to see the production of handmade paper and umbrellas, traditional crafts of Pindaya that are still popular today. Next visit to the Khaung Taing Village to see the local life and works like sunflower roasting, crushing beas, making crackers and steeping rice and so forth. Then it’s on to Nyaung Shwe, passing by more beautiful scenery as you approach the edges of Inle Lake. Upon reaching town, transfer to your hotel for the evening.

Overnight in Inle or Nyaung Shwe 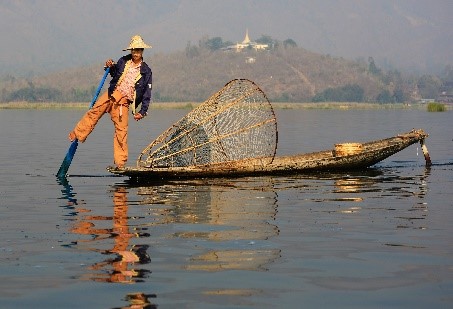 Enjoy a full day excursion on remarkable Inle Lake, traveling in a private long-tail boat across Myanmar’s second largest lake. You will pass by local villages inhabited by the Inthar, Inle Lake’s native residents. See houses built on stilts and narrow channels used by the residents to travel from place to place by boat. Get a closer look at their local life as you pass by floating gardens, growing crops such as tomatoes and chilies, and stopping in to visit traditional workshop. You will have a chance to stop in Nga Phe Kyaung, a large monastery where you will learn more about the lives of monks and their role in the community. 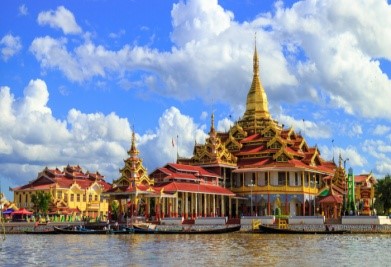 Continue to Indein, passing through smaller canals to reach the western bank of Inle Lake where this magical village is located. Stroll through the village before continuing on foot to the top of a stupa-covered hill called Shwe Indein. Enjoy the views from the top and the peaceful setting as the stupas small bells chime in the wind. Then return to the boat, making one last stop at Phaung Daw Oo, the lake’s most revered shrine. Climb the steps to the main pavilion where five Buddha images are situated on a pedestal in the centre of the room. Watch as local worshippers place thin sheets of gold leaf on the images, making an offering in solemn prayer. Following this insightful visit, return to the jetty and climb in your boat for the journey back to your hotel.

Overnight in Inle or Nyaung Shwe 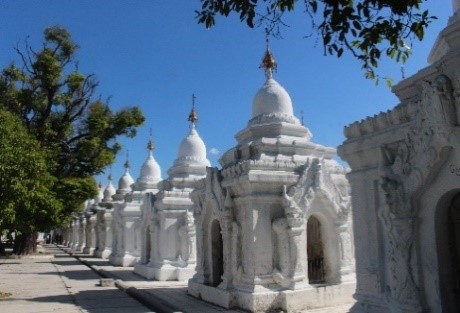 After breakfast at hotel, drive down to Mandalay. You will arrive at Mandalay in the late afternoon, drive to hotel for check in. In the evening, visit to Kuthodaw pagoda consisting of 729 marble slabs of Tri-pitaka and it has been recognized as the world biggest book. It is also included in the list of Memory of the world of UNESCO sites. Climb up to the top of Mandalay Hill to watch the beautiful sunset and panoramic view over the city. 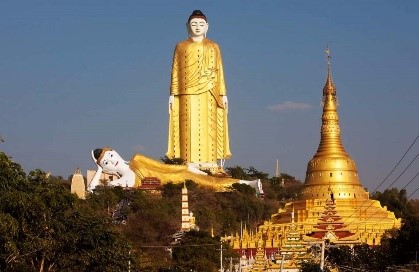 After breakfast at hotel, drive to Monywa (about 8:00 am in the morning) is a provincial city in central Myanmar, 136 km north-west of Mandalay. Visit to Thanboddhay Pagoda, its modern architecture is unique and the most revered pagoda among Buddhists. There are many different Buddha images, row upon row in ascending tiers in niches along the walls with an amazing total number of 582. 257! Continue your visit to the nearby Bodhi Tataung (1000 Bodhi trees: under each tree one Seated-Buddha image is placed), the most impressive Standing Buddha Image (130 meters) which has been recognized as the world tallest one. 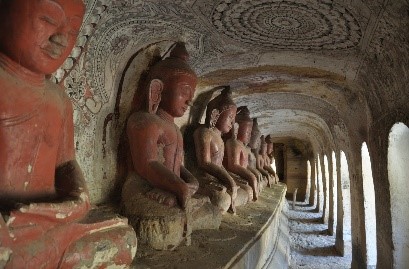 Continue driving to the famous caves of Po Win Daung, 25 kilometers west of Monywa. Watch sandstone caves which contain many carved Buddha images and well preserved mural paintings of Nyaungyan period in 17-18 centuries. -Finish your tour with the 46 caves of Shwe Ba Taung cut vertically down into the sandstone are believed to have been cut out at the same time of Po Win Daung images.After sightseeing, drive back to Mandalay and you arrive back to hotel in the late evening.