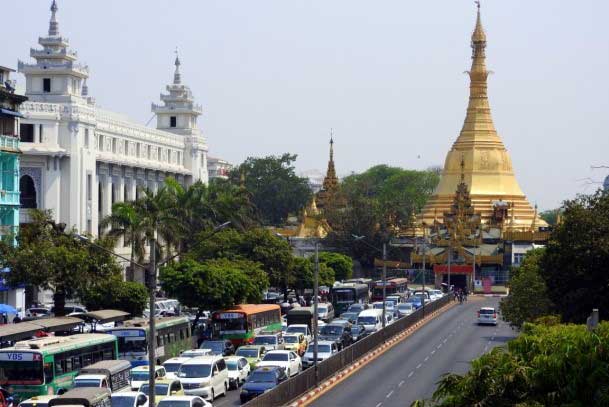 Yangon, the largest commercial city, is the one of the main gateway to Myanmar. Yangon is evergreen and cool with lush tropical trees, shady parks and beautiful lakes. Yangon has earned the name of "The Garden City of the East". Since the colonial era, it has been an essential trading port for business and hub for education in the country. The British established Yangon as their capital in 1852 after they won control of Lower Myanmar. They built many beautiful colonial-styled buildings. Some fine examples of colonial architecture can be seen on Pansodan Street and Strand Road.
The sprawling city was founded by King Alaungpaya , who gave new name of Dagon as Yangon, which means 'End of Strife'. According to the chronicles, it was town called Okkalarpa, the name of ruler King, who welcomed Two Merchants (Tapassa and Balica) brought hair relics of Buddha after meet with Buddha In India. There are three famous pagodas which hair relics were enshrined: Shwedagon , Sule and Botataung Pagodas: full of pilgrims daily.
Yangon, the most heavily populated city in Myanmar with five million residents, has streets that are safe any time of the day or night. Yangon is very colorful with different people devoting in various religious.